About the Author:
New York Times and USA Today bestselling author Katy Regnery started her writing career by enrolling in a short story class in January 2012. One year later, she signed her first contract and Katy’s first novel was published in September 2013. Twenty-five books later, Katy claims authorship of the multi-titled, New York Times and USA Today Blueberry Lane Series, which follows the English, Winslow, Rousseau, Story, and Ambler families of Philadelphia; the six-book, bestselling ~a modern fairytale~ series; and several other standalone novels and novellas. Katy’s first modern fairytale romance, The Vixen and the Vet, was nominated for a RITA® in 2015 and won the 2015 Kindle Book Award for romance. Katy’s boxed set, The English Brothers Boxed Set, Books #1–4, hit the USA Today bestseller list in 2015, and her Christmas story, Marrying Mr. English, appeared on the list a week later. In May 2016, Katy’s Blueberry Lane collection, The Winslow Brothers Boxed Set, Books #1-4, became a New York Times E-book bestseller. In 2016, Katy signed a print-only agreement with Spencerhill Press. As a result, her Blueberry Lane paperback books will now be distributed to brick and mortar bookstores all over the United States. Katy lives in the relative wilds of northern Fairfield County, Connecticut, where her writing room looks out at the woods, and her husband, two young children, two dogs, and one Blue Tonkinese kitten create just enough cheerful chaos to remind her that the very best love stories begin at home. 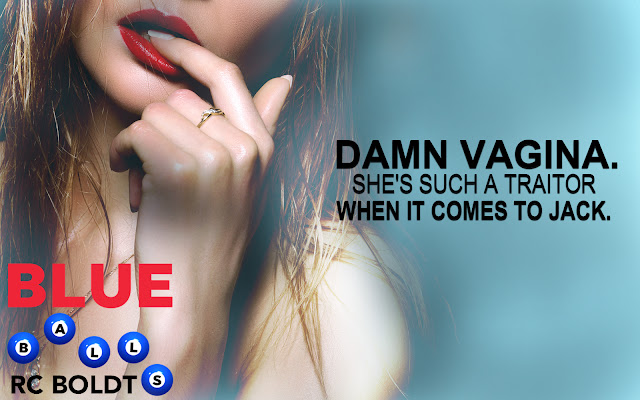 BLUE BALLS: When the universe gets in the way of your "follow through"Get ready for this laugh-out-loud rom-com by RC Boldt!Release Date: August 8thPREORDER NOW!Amazon US: http://amzn.to/2sDNJ7tAmazon Universal: myBook.to/BlueBallsBarnes & Noble: https://goo.gl/1iHNLWiBooks US: https://goo.gl/QB1KCEiBooks UK: https://goo.gl/FVxVd7iBooks CA: https://goo.gl/3TK6rYiBooks AU: https://goo.gl/aDkucKKobo: https://goo.gl/tg8XScEnter the PREORDER GIVEAWAY → https://goo.gl/forms/5Zv2fjuBRq4LB99U2BLUE BALLSTruth: A painful condition caused by a prolonged state of sexual arousal without release.Myth: Only affects males.SARAHI’m beyond frustrated with the man who’s left me high and very far from dry. Multiple times. But, somehow, even though I’m not interested in a relationship, Mr. Tall-Dark-and-Handsome keeps me coming back for more—one crazy, sexual debacle after the next.Come hell or high water, the stars will align, and the release will be out of this world.JACKI’m captivated with the woman who’s left me sixty-nine shades of blue, and she's only in this for one thing. The first time, I blew it—and not in the good way—but I’m going to ensure we finally see it through. I need to put an end to this “plague” of sexual calamities and prove to Sarah that we can have more.It's time to grab the universe by the balls and show it who's boss.
Posted by Always Reading at 9:23 AM No comments:

The Edge of Us by Veronica Larsen releases on AUGUST 1st!
Are you ready to be on the edge?
★Amazon preorder → http://amzn.to/2h385pm
★iBooks preorder → http://apple.co/2rx3EnW
★Release Alert → http://bit.ly/2pXM4HW
★Blogger Signups → http://bit.ly/2rsiRXr
"Veronica Larsen ripped my heart out! This is a love triangle that will stay with me for a long time. 5 Star read you won't be able to put down." ~Alta Hensley, USA Today Bestselling Author
Eight years ago, Cole Van Buren left me at the altar without a single explanation. My heart’s been at a standstill ever since, the anger keeping me from moving on. Keeping me from seeing the man who’s been right in front of me all this time…
Andrew’s been the friend I needed, the one constant through the hardest times of my life. But one night, the lines blur and we’re tipped into something more. Just when I’m ready to explore what we could be…
My ex comes back.

Cole says he didn’t come to get me back, but I should know better. The answers he dangles overhead are the ones I need to finally let go.
Except there’s no such thing as closure, only a past that wants to pull you backward.

Posted by Always Reading at 1:32 AM No comments:

Erik Anderson is paying for his mistakes and enduring every bit of pain that comes his way. After all, if it weren’t for him, the girl who gave him more than he deserved would still be alive. Even if he were to be put out of his misery, he’d never see her again. Considering angels go to heaven and sinners go to hell, Erik’s going to burn.
Polly Madison has never had it easy. She wouldn’t even know what that looked like. Young and naive, she learned the hard way how vindictive some men can truly be. She’s fought her whole life for stability and control, both of which she refuses to give up ever again since she’s older and wiser now.
When Polly and Erik run into each other in the most clichéd way possible, it shouldn’t have meant anything.
In his arms, Polly felt safer than she ever has before.
Lost in her eyes, Erik sees a future he’d given up on.
They try to fight it. Try to deny something neither is prepared for. But when his own insecurities put her in harm’s way, Erik knows protecting Polly’s life is more important than continuing to wreck his. 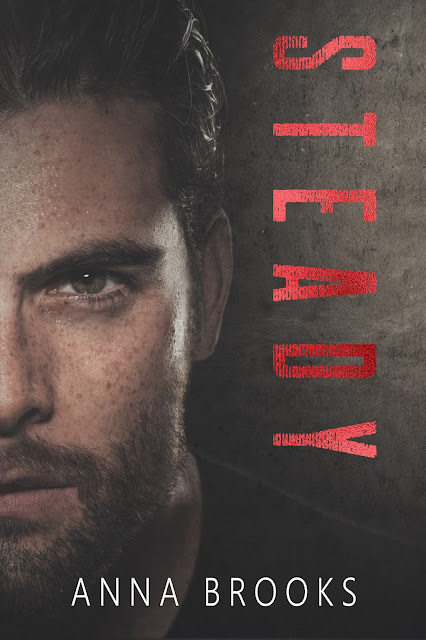 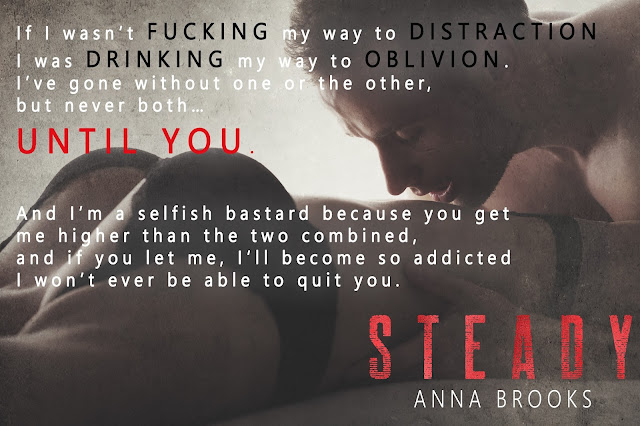 Anna began writing when she thought the world would want to hear her sick lyrics through song. Since then, she's realized her childhood dream wasn't so far-fetched, just misguided. Now she writes romance with real emotions and happy endings. If Anna isn't writing or reading, she can be found by a space heater painting her nails and drinking a ridiculous amount of Diet Dr Pepper. She also likes to hang out with her husband and two boys. If it wasn't for them, she wouldn't ever leave the house. Anna was born in Wisconsin but now lives in the Evergreen State.

Check out the Giveaway over on Anna's Facebook Page 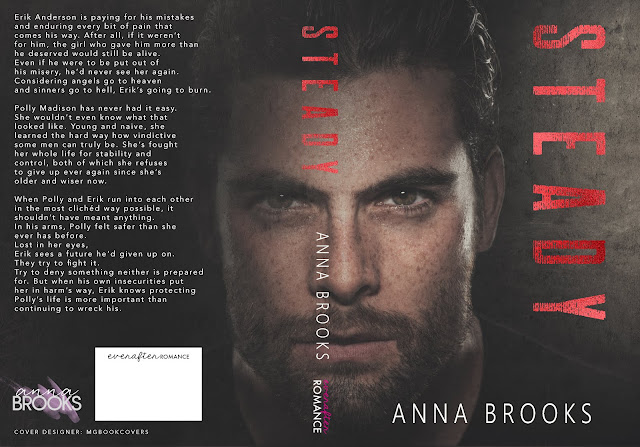 Posted by Always Reading at 1:49 PM No comments:

Four books for one low price?! YES YES YES! The Polaris Series Boxed Set by ME Montgomery is now available! ON SALE FOR A LIMITED TIME

Meet the North and Matthews families and their friends who are sure to make you feel warm all over and your heart pound with unseen twists and turns as they fight for their happily ever after. New families form, haters turn to lovers, and former lovers gain a second chance in these emotion-packed contemporary romance stories.

About the Author:
M.E. Montgomery has been an avid reader her entire life, and after falling in love with so many characters created by other authors, a new one began to form in her head. With the support of her family, she decided to to write it. She is the homework queen to her four school aged children who think she is a genius in math, science, history and spelling. Fortunately, her biology and elementary school teaching background help her to keep up the expert façade, at least for now. Although born and raised in the Washington DC metro area, she has considered many places to be called home since she left to attend college in North Carolina. She is a proud Navy wife, setting up a home wherever the Navy sends her husband. When she’s not reading or writing, she loves to go camping with her family, drink wine on the deck, and be swept off to romantic getaways.

Cover Reveal: Come Back to Me 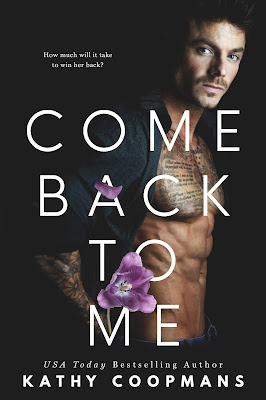 From USA Today Bestselling Author Kathy Coopmans comes a soul crushing story of second chance love. Come Back To Me.What does one do when everyone you love dies?How much is a woman supposed to take before she crumbles?How much?Adriana Jensen is the woman to ask.She’s lost too many people to count.The one death that destroyed her the mostwas her husbands.Only... he didn't die.What does one do when forced to walk away from his wife?How much will it take to win her back?How much?Blake Jensen, Adriana's estranged husband, is the man to ask.He has one question to ask himself.How much will it take for her to come back to me?

Add to your TBR: http://bit.ly/2scjCom 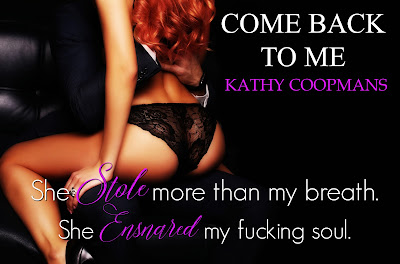 USA Today Best Selling Author Kathy Coopmans is a Michigan native where she lives with her husband, Tony. They have two son's Aaron and Shane.


She is a sports nut. Her favorite sports include NASCAR, Baseball, and Football.She has recently retired from her day job to become a full-time writer.
She has always been an avid reader and at the young age of 50 decided she wanted to write. She claims she can do several things at once and still stay on task. Her favorite quote is "I got this." 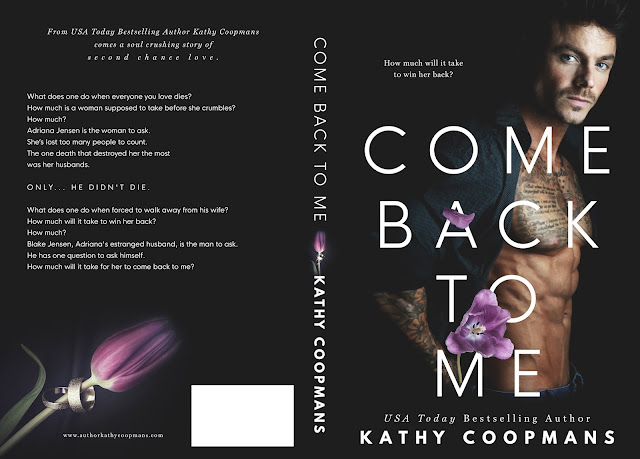 Posted by Always Reading at 10:21 AM No comments: