Almost Everything by Christie Ridgway is releasing on DECEMBER 12th!
Will Vance be willing to risk everything? 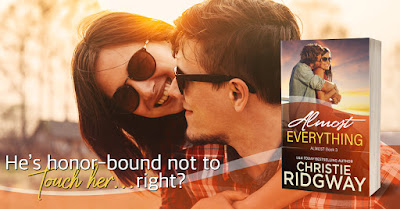 ADD to your TBR → http://bit.ly/2yOLDJ4FOLLOW Christie on Bookbub → http://bit.ly/2s9AvBALayla Parker travels to Crescent Cove to meet the soldier who tried to save her father in battle. Her dad’s final request was for her to enjoy a month of sun, sand, and fun along with the handsome combat medic, Vance Smith. Despite her sadness, she’s determined to follow through.Vance is flummoxed when he meets the full-grown daughter of his fallen officer. He’d expected a little girl. But a promise is a promise, and it gets harder by the day to resist the charms of the beautiful woman who threatens the safety of his scarred heart. But he’s honor-bound not to touch her…right? Except there’s the beautiful beach and the beautiful woman and the promise of a beautiful future…all a man could want if only he chose to risk everything.**This is a previously published STANDALONE romance.
Posted by Always Reading at 9:24 AM