Your next binge read is coming... #TeaserThursdayDeep by M. Malone & Nana Malone releases on January 8th! 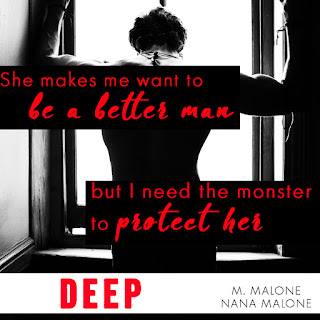 Amazon Alert: http://bit.ly/2zAkxC1ibooks: http://apple.co/2By4TIsNook: http://bit.ly/2AILJCTKobo: http://bit.ly/2AHoZmAI am the ghost that haunts your dreams. I am a liar, a protector...a killer...I am death.You think you know my story, but you have no idea. My death was just the beginning.I’m a dead man.In the years since I escaped the shadow organization that owned me, my vow to protect my family is the only thing that kept me alive.Until I meet her.Too bad I need the monster to protect her from the demons of her past.Too bad she’s not that innocent.Cliffhanger Warning: I know you want the whole story right now. But that's not how things went down. And I think you know by now when it comes to ORUS, things don't always go according to f*cking plan.(The Deep Duet unfolds over the course of two books. Deep will be followed by Deeper, releasing on January 29th)
Posted by Always Reading at 9:19 AM