Hermosa Beach Series
Author: Jillian Liota
Genre: New Adult Romance
Welcome to Hermosa Beach
The O.C. meets Gossip Girl in this scintillating romance series following childhood friends in the elite Southern California town of Hermosa Beach as they navigate secrets, scandal, and sex. Or might it be love? Join Wyatt, Lennon, Lucas and Paige over one hot summer filled with angsty secrets, steamy hookups, and all the drama - a new girl in town, a secret relationship, a fake marriage, and a forbidden affair - in this 4-book series perfect for your next binge-read. 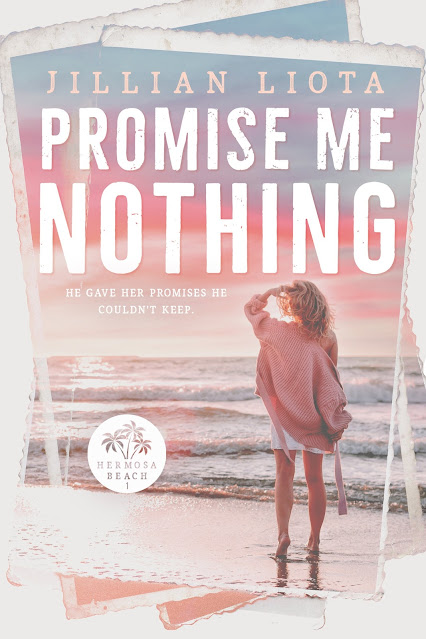 PROMISE ME NOTHING
Wyatt Calloway isn’t a good idea.
I didn’t pick up my life and move to this urban beach city to spend my days swooning over a rich bad boy who rides a motorcycle and seems to always get his way with just a flash of that smile. I’m here to get to know the brother I’ve never met. Try and create a family when I’ve gone so long without one. Maybe find a place where I belong. But I can’t seem to get him off my mind.
Hannah Morrison isn’t a good idea.
I’m back in town just for the summer, and my priorities are to spend time with my little sister, check in with my family, and make sure things aren’t really as bad as they seem. But somehow, the new girl becomes my focus. She’s got a ton of baggage, and she doesn’t understand why she’s really here. But I’ll do anything to make her feel like she belongs. Even give her promises I’m not sure I can keep.
Welcome to Hermosa Beach 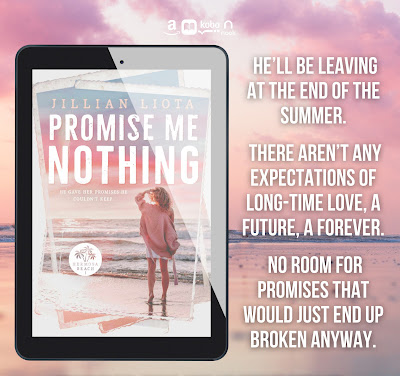 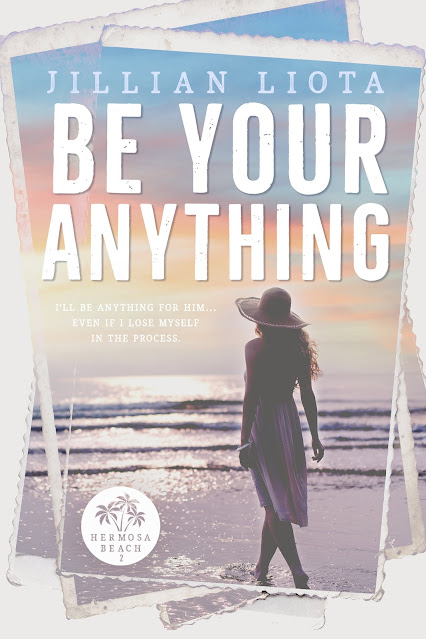 BE YOUR ANYTHING
Lennon Day is a problem.
She was supposed to be a one-time diversion, a friend that temporarily soothed the desires raging under the surface. Now we can’t keep our hands to ourselves, playing a game that we’re both going to lose. I thought I liked my life how it was. I wasn’t expecting for anything to change, for my priorities to ebb and flow like a wave. And now I’m worried everything is going to crash down around me. And that she might be the one who gets lost in the storm.
Lucas Pearson is a problem.
He’s handsome, charming, my childhood crush... and unfortunately, not completely available. When I moved back to Hermosa Beach to work for my family’s foundation, I wasn’t expecting anything to happen. But it did. Now, we collide like magnets, finding each other in the night to satisfy the urges we can’t seem to escape. It’s supposed to be casual. No strings. Emotion-free. And definitely a secret. So what’s the problem? I’ll be anything for him… even if I lose myself in the process.
ADD TO GOODREADS 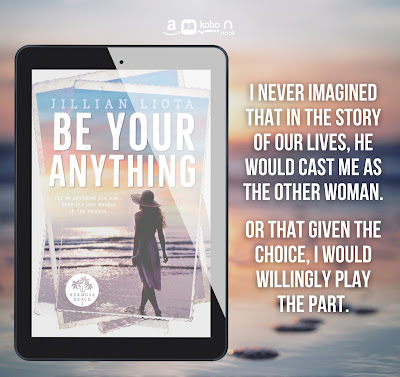 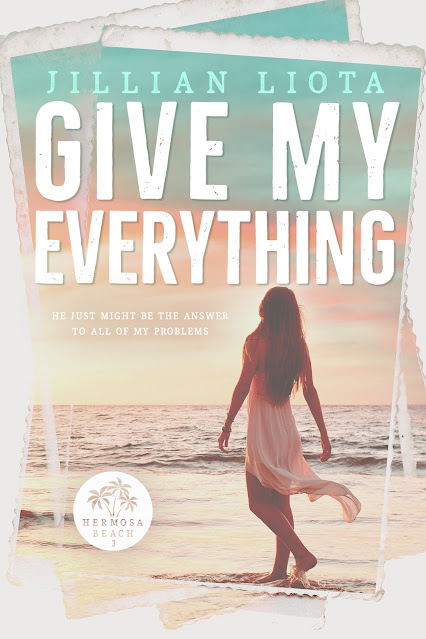 GIVE MY EVERYTHING
Ben Calloway is my new fiancé.
When he suggests we get married, I nearly laugh in his face. That is... until he points out just how much I need him. I’m single, pregnant and alone in a tight-knit town I ran away from five years ago. I’ve burned every bridge there is to burn in Hermosa Beach, and assumed my life would just continue to go up in flames. But who knows? Marrying Ben just might be the answer to all of my problems.
Remmy Wallace is my new bride-to-be.
I wanted a family once. Until an act of betrayal stole my vision for the future. Now, I’m lying in wait until I can figure out how to bring down the man who hurt me. And marrying Remmy could be exactly what I need. She wants to know what I get out of the deal, but what am I supposed to say? Not the truth, that’s for sure. My reasons are my own, and I plan for them to stay that way.
ADD TO GOODREADS 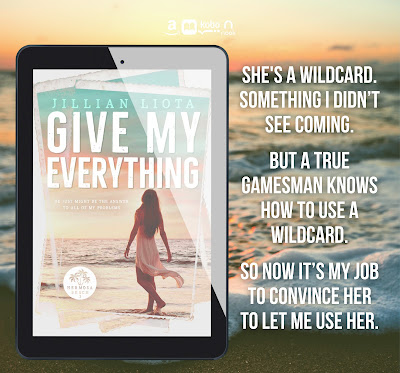 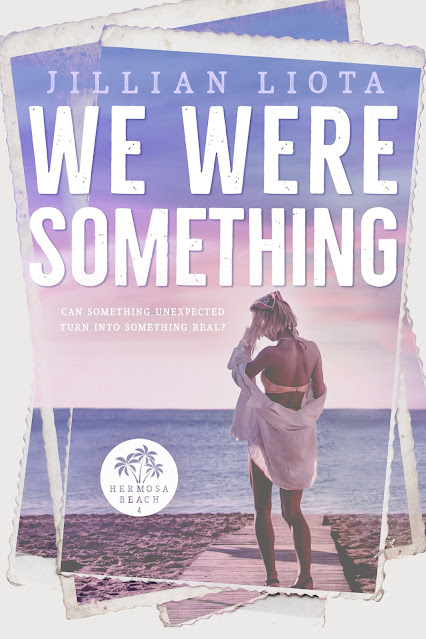 WE WERE SOMETHING
Logan Becker came out of nowhere.
After a disastrous first meeting, the handsome pediatric surgeon is suddenly all I can think about. Sure, he’s older than me and fresh off a divorce, but we can have a little fun, right? Nothing serious. Only… Logan isn’t the kind of man to just play around. His slow and steady approach has me nearly bursting at the seams and desperate for more of anything he’s willing to give me. His time. His body. His attention. Maybe even his love.
Paige Andrews came out of nowhere.
She’s sexy, confident and far too young for me, not to mention the fact we come from two different worlds. I’m into early mornings and efficiency, while Paige believes in late nights and dancing your problems away. But still, I can’t seem to get enough of her. Of her sassy smile, her flirtatious laughter, her body writhing beneath mine. And when things become more serious, I have to ask the ultimate question: Can something unexpected turn into something real?
ADD TO GOODREADS 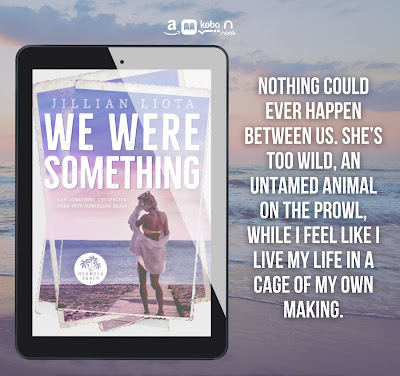 Jillian Liota is a Southern California native currently living in Kailua, Hawaii. She is married to her best friend, has a three-legged pup with endless energy, and acts as a servant to two very temperamental cats.
Jillian has authored ten novels in contemporary and new adult romance, and has had her writing praised for depth of character, strong female friendships, deliciously steamy scenes, and positive portrayal of mental health.
AUTHOR LINKS
FACEBOOK
FACEBOOK GROUP
NEWSLETTER
GOODREADS
WEBSITE
INSTAGRAM
BOOKBUB
AMAZON
TWITTER
PINTEREST
TIKTOK
Posted by Always Reading at 8:06 AM